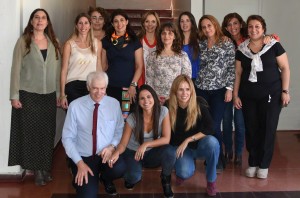 The psychologist and interpreters at the end of the San Juan video interview training course.

I arrived at 8 am on Sunday 19 April, in San Juan after a comfortable overnight bus journey from Tucuman. I was met by Inés Rodriguez who took me to my hotel and later took me to lunch. During lunch, we had the opportunity of talking about the forthcoming training and she was also able to give me more details about the work of the psychologists and investigation process for child sexual abuse cases. It was clear from this initial meeting that there was a strong commitment by the province to improve the way in which cases of child sex abuse were investigating. Prior to my visit and during the week, she ensured that everything ran smoothly. On Monday, she asked me if it would be appropriate to invite and judges to observe the training. I explained that this was an excellent idea because it was important that the judges understood the nature of the training course and also how it impacted their work during the investigation. As a result, we had judges attending on Wednesday, Thursday and Friday and in fact one of the judges attended on all three days. Their involvement was a strong signal of support to the psychologists and furthermore, their participation in the planning and the feedback sessions after the role-play interviews adding significantly to their value. Their comments from the perspective of the investigator were particularly valuable.

The training course started at 9 am on Monday 20th April. We were using the facilities at the Catholic University of Cuyo on the outskirts of the city. There were 10 psychologists participating in the training not all of whom undertook evidential interviews with child victims, but all were keen to participate in the training. Included in the participants were two psychologists employed by the federal authorities who have a responsibility for interviewing victims of trafficking and sexual exploitation. We used a classroom for the theoretical elements of the training and then moved to a special facility in the Psychology Department at the University. This comprised two rooms, the first was large enough to accommodate all of us with chairs for the briefing and the feedback sessions. The role-play interviews also took place in this room. The other members of the course went into the adjacent room and observed the role-play interview through a one way mirror system. I recorded all of the interviews using the evidential recorder and gave a copy to the interviewer in each of the role-play exercise.

On Thursday 23rd April, I was asked to give a briefing session to a working group of judges who had been given the responsibility by the provincial court to review the systems and procedures related to children in the criminal justice system both as victims and as offenders. I outlined the current policy in the UK with regard to juvenile offenders and also the developments following the introduction of video recording child witness interviews in 1992. I was able to link this to a description of the training that I was giving to the psychologists and to demonstrate how it linked to the broader criminal justice procedures during both the investigation and the trial.

The video interview training was completed by 4 pm on Friday 24th April. I was then joined by Mariano Nino, the project manager from the Asociación por los Derechos Civiles, ADC, to present a session to a group of postgraduate students from the University. The session was from 5:30 pm to 8:30 pm. We had a further session on Saturday morning from 9 am to 12:30 pm. The purpose of the session was to introduce students to the concept of integrated multiagency investigation of child sex abuse cases and the use of video recorded interviews in the prosecution process.