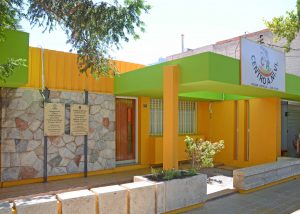 Entrance to the Centre

The training course that took place in April 2015, was a start of a collaboration between the Trust and the Province. The President of the Court and his colleagues were committed to improving the effectiveness of the investigation of allegations of child sexual abuse and also reducing as far as possible the trauma experienced by the child and his or her parents. They were impressed by the work the Trust had undertaken in Cuba, particularly, the child protection centre in Havana and as a result, the Provincial Court purchased a house in a residential neighbourhood a few blocks from the main court building in San Juan to establish an integrated centre for receiving and investigating allegations of child sexual abuse.

The project was led by Javier Vera and was supported by advice from Dr Tony Butler. A team of architects worked closely with the head of the team of psychologists, Lic Ines Rodriguez to design the layout of the rooms and the internal furnishings. The result was an outstanding integrated child protection centre that was opened by the governor of the province in February 2017. The opening received wide coverage in the media and has been welcomed by child protection professionals throughout the province. In September 2017, the head of child protection work for UNICEF in Argentina, Sabrina Viola, visited the centre and expressed her admiration for the work that is being done and the innovations that had been achieved by bringing key childcare professionals together in one building.

To enable other provinces to understand the benefits of the new centre in San Juan, Dr Tony Butler has prepared to briefing documents explaining the systems and procedures and the other describing the layout of the accommodation in the building.

Click here to see a plan of the centre:

Click here to read the briefing note about the system and procedures at the centre: